Evidence evaluation from a Swedish perspective

The National Forensic Centre, NFC (formerly SKL) is the national laboratory of crime forensics in Sweden. As such it is responsible for the whole forensic process within the Swedish Police, i.e. from crime scene to court. NFC has since several years adopted a logical way of reasoning for forensic evidence, based on the framework of case assessment and interpretations (CAI) that was developed at the former Forensic Science Service in United Kingdom (Cook et al, 1998). The weight of evidence is represented by a likelihood ratio for two competing propositions about the evidence material. At NFC this likelihood ratio is reported on an ordinal scale of conclusions, symmetric around the value 1 and with scale levels corresponding with intervals of likelihood ratios.

In this talk we will review the work at NFC and how the scale of conclusions is communicated. We will also present how the ideas from CAI have been used to form a framework for direct interpretation of findings at the crime scene, to which laboratory results do not always apply. We will also discuss some issues concerning the use of Bayes theorem in court. 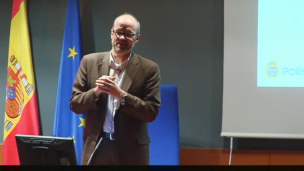 A vueltas con la religión (I)